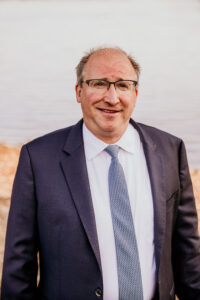 Dr. Schultz was born and raised in Pittsburgh, PA. He received his undergraduate education from Washington and Jefferson College in Washington, PA, majoring in Chemistry. Dr. Schultz then enrolled in the Master of Medical Science Program in Anesthesia at the Emory University School of Medicine. Following the completion of his Master’s Degree, he was employed as a Physician Assistant Anesthetist in the Department of Cardiothoracic Anesthesia at Emory University Hospital. It was there that he met his future wife, Sharon, who was employed by Emory as a Critical Care Cardiac RN. In 1984, Dr. Schultz entered the Emory University School of Dentistry where he was an Emily Woodruff Scholar, graduating as a member of the last class of the School of Dentistry in 1988. Dr. Schultz then continued his post-graduate advanced dental education at Emory University and Affiliated Hospitals, completing his residency in Oral and Maxillofacial Surgery in 1992.

Dr. Schultz, his wife Sharon and their six children have called Newnan home since 1996. His hobbies include frequent visits to the gym, lake-living, boating, golfing, woodworking, do-it-yourself projects and especially time spent with his family and two golden retrievers, Molly and Jack. He enjoys practicing the full scope of oral and maxillofacial surgery.

Back to the top